to enjoy the BIG screen


This article may help you to enjoy the big screen in regular and especially in IMAX theater. Other than screen size, a wide angle of view is also determined by distance of seating position to screen. A big screen definitely needs high resolution image.
[Indonesian version click here or my facebook note] 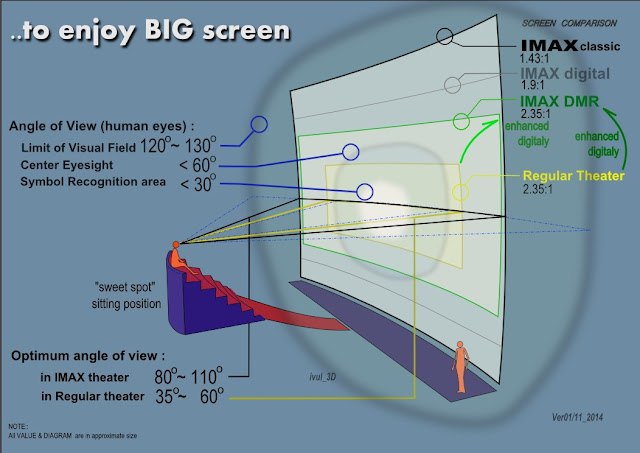 EYES
First of all, let's observe human eyes characteristic related to angle of view (please see diagram above):
If there are objects between  60° ~ 120°, human will realize there are objects surrounding but will not be able to describe them in detail except if both eyes look through and put the object in range of  symbol recognition  for further observation.

Naturally, human steer their eyes ball actively to observe objects which needed more attention. In other words, range view of 120° is an extra view which has function as "visual radar". Therefore, human could have an awareness of objects surrounding in advance, in case any danger approaching or just to view scenery in wide angle. Further, eyes muscles will move eyes balls and stare the object inside of symbol recognition area.

Once gaining focus at something in  symbol recognition area, then human will ignore all information in wide angle view (both eyes still can see the object at surrounding).  It is the reason, not allow to texting (SMS) during driving a vehicle. Driver's attention will move from road to the smart phone's screen, even though the road still can be seen by the driver.

IMAX
Refer to the diagram, a screen size of IMAX classic attempts to fill in the area of view, as wide as possible. In the biggest  IMAX theater:  LG theater, Sydney or Keong Emas Taman Mini Indonesia Indah,  while we sit at sweet-spot and stare to center screen then we are (almost) difficult to feel and see the edge of screen. The screen seems without edge (frameless) except we have to glance to the edge. Aspect ratio of IMAX screen (classic) is almost square, so that top/bottom view will be filled by screen.
[in addition: IMAX dome, screen shape of IMAX is almost half sphere. we have to turn our head to see the screen edge]

Initially, IMAX was designed for short documentary movie which is below one hours duration (mostly 45 minutes). IMAX film maker understand that the film will be shown at huge screen of IMAX which human's center of sight is below 60° only. Therefore, IMAX documentary movies have typical style i.e.:
Therefore, while you are watching a scene of IMAX documentary movie in IMAX theater, it is not necessary to attempt to see the whole surface screen (including the edge). It is enough to enjoy the scene by leering your eyes or turning your head. IMAX's audience pay attention to the main attraction only. As well as,  we view surrounding  us everyday, for instance, when we are speaking with someone then our eye will stare to his/her face only and the rest of our visual  is an extra view for knowing the situation surrounding us. 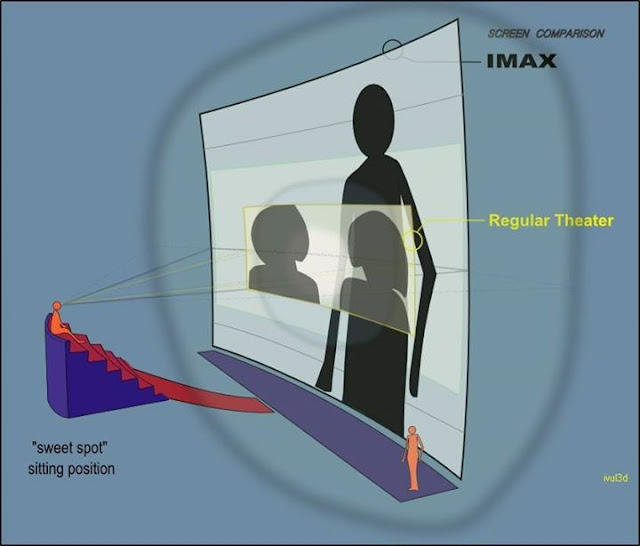 Regular Theater
Refer to the comparison diagram above, center eyesight almost cover the screen of regular theater, except most edge (left and right side) which wider that center eyesight. A Regular movie uses 2:35;1 aspect ratio which it has addition view and is wider than  symbol recognition. Therefore, we still has to leering the eyes to read subtitle or there are two actor/actress where their position in opposite way, very left and very right on screen. In regular theater is still possible for  close up scene  for show the expression of player (actor/actress).
Yup, indeed you can also feel  an IMAX sensation if you sit at very front row. However, please remember that the film makers are not prepared their movie to be watched at the very close distance or wider view. Except a colossal movies, which is still has  landscape scene or  medium shot. Definitely, this is also depend on a quality of projector in certain theater. Some theater is not good enough to watch the image closely due poor quality system. Also at very close distance, the picture will be appeared hazy and tiny holes will be noticeable on screen. The tiny holes in theater screen are for passing through sound from speakers which installed behind the screen.

IMAX DMR
DMR (Digital Media Remastering) is a technology to convert a conventional movie become IMAX format. The result is conventional movie can be shown at a gigantic screen of IMAX theater. It become confusing at the beginning, to watch a feature film (movie) in IMAX theater. The early DMR movie still followed IMAX style as mentioned before, no extreme close up except medium shot and more landscape scene, camera movement was smooth and one direction.  However, some of movie converted to IMAX have still styles for regular theater. Therefore, some DMR movies are not comfortable to watch in huge screen, thus make nausea for some audiences due to camera shaking.  Also, it is difficult to heed the story because whole screen surface is used by film maker as center of visual attention. As the consequence, spectator struggle to see whole screen surface in IMAX theater. If you have a plan to watch kind of this movie (after reading its review), you must choose a seat at the last row in theater.
[shaking camera style is used by few movie director to dramatize a scene: it seems to be covered by TV reporter or shot by handycam]
IMAX DMR movie list at:
http://en.wikipedia.org/wiki/List_of_IMAX_DMR_films

IMAX Digital
Today. IMAX digital is still to attempt as close as possible to IMAX classic which is using celluloid 70mm film. It will be available at near future. 12K resolution digital image is needed for replacing 70mm celluloid film. I had an opportunity to watch IMAX digital at IMAX classic screen. Unfortunately, the picture was not fulfill whole the screen surface. If attempting to fulfill the screen surface then the pixels will be noticeable by audience who sit very near to screen. IMAX movie (digital) today, fit and suitable for IMAX digital theater only. Indeed, screen size of IMAX digital is height X width: 8.5 m x 18 m, it means is only a half of IMAX classic screen (mostly screen size approx. 20m x 26m. The biggest IMAX screen is 29m x 35m). See the comparison below.

A compromise of IMAX (classic/digital) and IMAX DMR
Number of movie directors had successfully combined two format in one movie and present the movie at IMAX screen. They combined IMAX format with  IMAX DMR, for example Batman (Dark Knight), Mission Impossible, Interstellar. In the middle of movie, some scene were shot with IMAX camera. The audience will notice the changing of aspect ratio. Most of scene were not shot with IMAX camera, the pictures are noticeable at IMAX screen (there are black are at the top and the bottom of  IMAX screen). Screen will be full with image when the scene was shot only by IMAX camera. Of course,  aspect ratio changing will not be found at regular theater because extra pictures had been cropped and removed  to fit for regular theater screen.

Right then, enjoy the movie on BIG screen  :)

[I'm still reviewing this article. So, any feedback & update are very welcome]

iful
"...to seek out new idea to boldly think who no one has thought before"